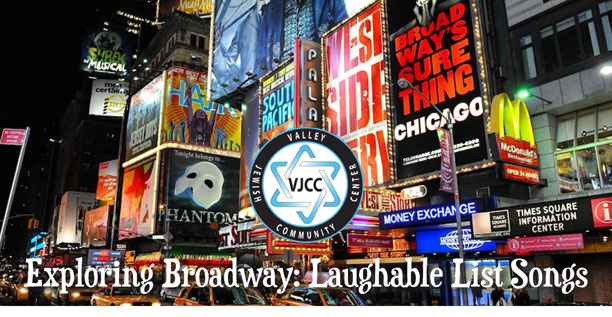 Save! Get “Early Bird” registration before April 5th!

“List songs” – sometimes called “laundry list songs” or even “catalog songs” – are said to date back to the ancient Greeks. In modern times, they appeared in 18th & 19th century operas, and certainly blossomed in Gilbert & Sullivan’s operettas in the late 19th century. In the 20th century, Cole Porter and Irving Berlin made them popular on Broadway. In the time since, others – including Rodgers & Hammerstein, Jule Styne, Stephen Sondheim, and others – have carried this tradition on in their musicals.

Join James Sokol for this special mini-series focused on these songs, which are often funny, sometimes even “escalating to absurdity.” Other times, they can even be dark and introspective, but always interesting! Audio & video performance clips from musicals of “the Golden Age” to contemporary classics bring the magic of Broadway into our discussion.